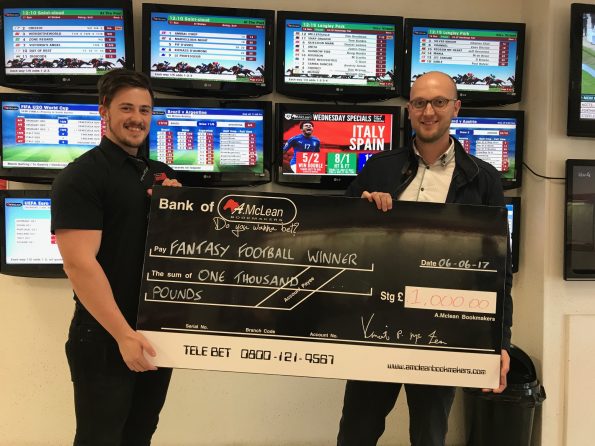 Congratulations to Mervyn Glasgow (right) of Cookstown, who won our 2017 Fantasy Football League with an overall score of 2,494! He had the choice of 2 prizes … an all expenses paid trip to a Man Utd or £1,000. As you can see from the photo, he is not a Mn Utd fan. He was won a free bet and a range of McLean’s merchandise! 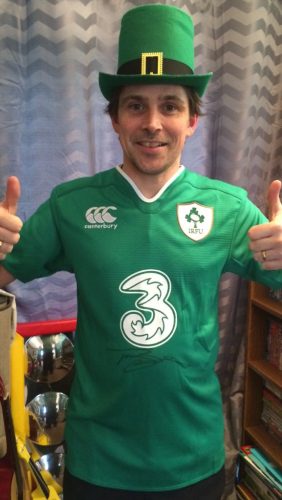 Simon was the lucky winner of our Tommy Bowe signed Ireland Rugby top. The above image shows him enjoying St Patrick’s Day festivities wearing the top. All he had to do was enter a social media competition to win! Keep an eye out on our social media pages for our next competition… 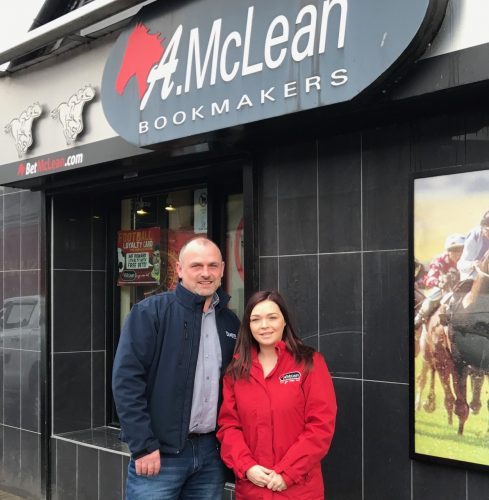 Dyed-in-the-wool Manchester United fans Brendan Crawford and his son Aaron were among the 85,000 Wembley crowd to watch their heroes triumph in Sunday’s ECL Cup Final after winning a radio draw organised by McLean Bookmakers.

They were sitting just 14 rows back when Zlatan Ibrahimovic headed home the goal at the United end of the stadium which gave the Reds a 3-2 victory over Southampton.

Brendan, 44, from Dunloy, and son Aaron, 16, a pupil at St Louis grammar school, Ballymena, jumped for joy as Ibrahimovic ran towards the corner flag to be mobbed by jubilant team mates.

But she immediately handed over prize to her husband, a life-long United supporter, and son.

Bernadine was shopping in Belfast when she heard she had won the draw. She was unable to contact Brendan who had an appointment with the barbers, and instead called Aaron.

She couldn’t believe her luck. Just days earlier, she overheard a conversation between the pair as they watched Jose Mourino’s men on TV, when Brendan

They had viewed the Reds live twice before, both times against Arsenal, once at Old Trafford and a second time when they found themselves sitting among Gunners supporters at the Emirates. But they were seated among their own on Sunday.

Brendan, a contracts manager with a Dunloy construction firm, had been to Wembley before. He was with a brother. But it was only to see the iconic old stadium being demolished, before being re-built.

He is an occasional punter, but admitted his luck was really in when Bernadine revealed she had won the sort of prize Manchester United’s ticketless Northern Ireland-based fans can only dream about.

Brendan, who was presented with his tickets by McLean’s marketing manager Megan McCormick, said: “The atmosphere was absolutely brilliant. We were there an hour and a half before the kick off to soak up the atmosphere, and although I’ve watched United play better football, the result was what mattered.

“I couldn’t believe how close we were to the pitch. The United fans outnumbered Southampton’s by 60-40% and I suppose they felt very unlucky after coming from two down to level the match. But Ibrahimovic is some player. That goal was something else.”

Congratulations to Wayne Ewart, who won 2 tickets to the afternoon session of the NI Open Snooker Final on Sunday 20th November 2016.

Keep an eye out in-store, on our website and on our social media pages for upcoming giveaways … we have a lot in store … 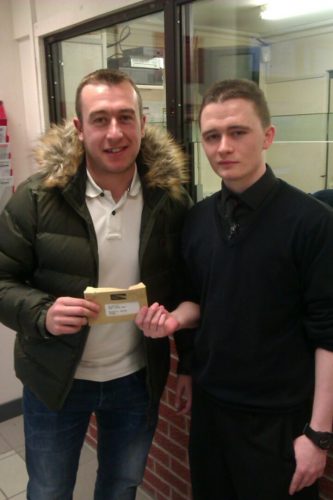 Congratulations to Trevor Walker who won our competition in conjunction with Cool FM. All he had to do was ring up with the correct answer to their question to win his prize. He has won an all expenses paid trip to the Man Utd v Man City match on Wednesday the 16 of October. The prize includes two tickets to the match, dinner at Old Trafford before the match, flights & accommodation… plus £200 in spending money. Have a great time at the match Trevor… 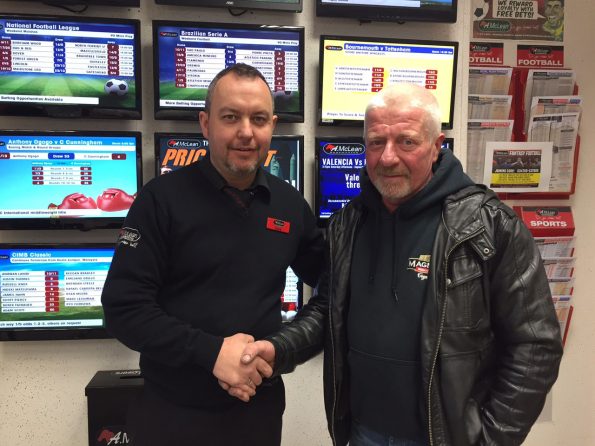 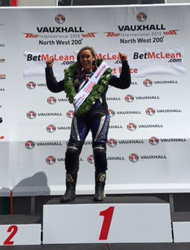 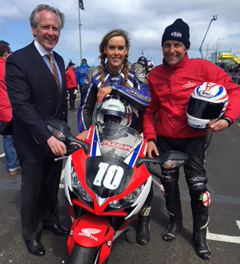 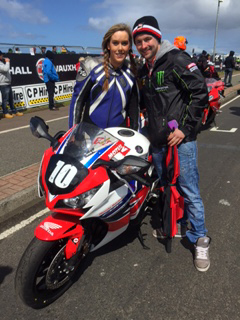 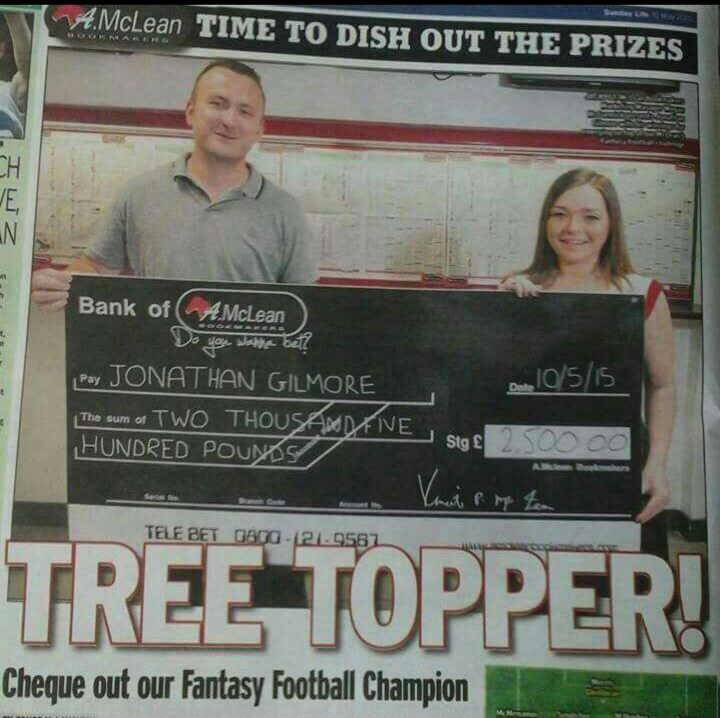 Congratulations to Jonathan Gilmore, who was the overall winner of the Irish Premiership Fantasy Football competition. He won a whopping £2,500! 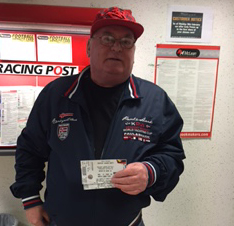 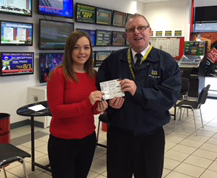 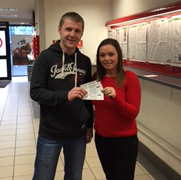 Congratulations to the winner of an all expenses paid trip for 2 to see Man Utd v Newcastle at Old Trafford. The trip includes, flights, airport transfers, transfers to and from Old Trafford, overnight stay in a hotel, executive tickets to the match & lunch in the Trafford centre! 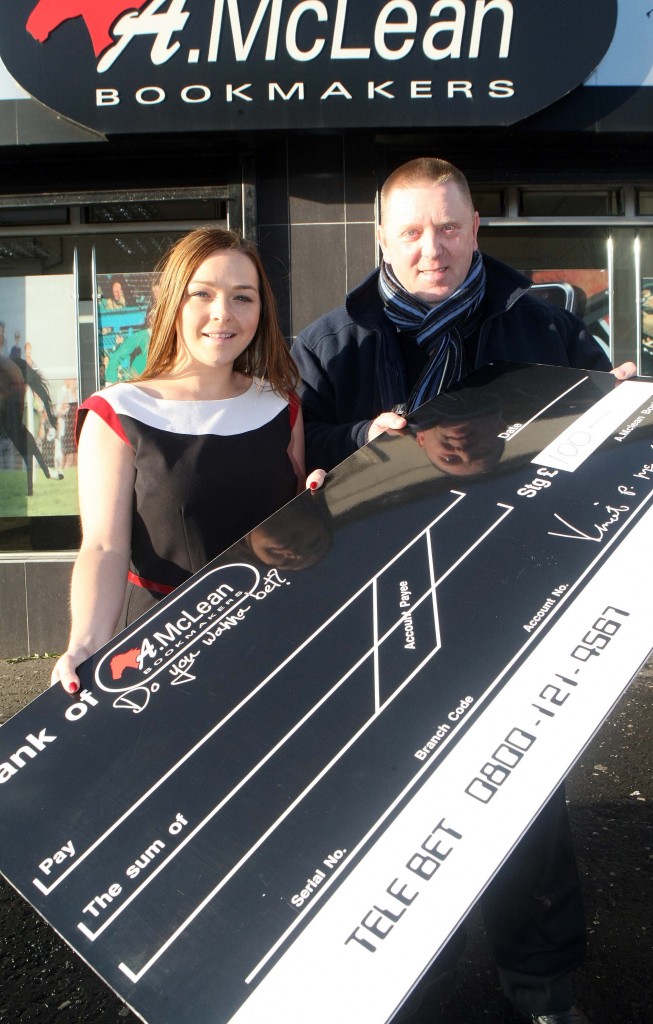 Congratulations to our winner for the month of November … enjoy your £1oo! 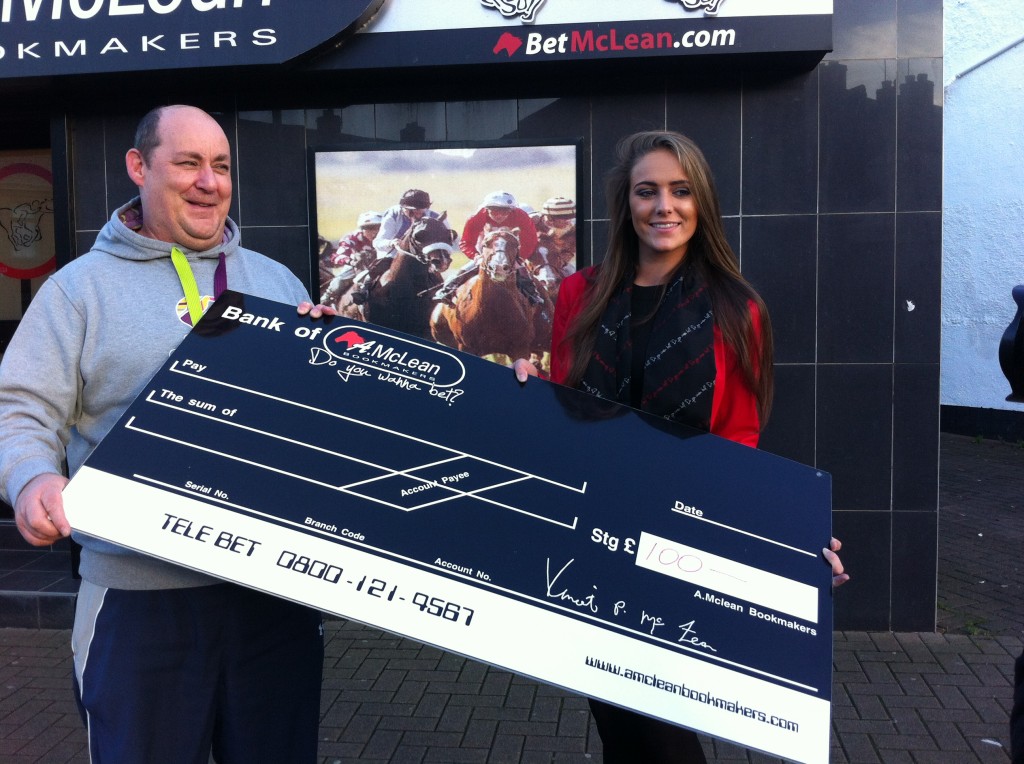 Congratulations to our winner for the month of October … enjoy your £1oo!

Congratulations to Oonag,h who was the lucky winner of an all expenses paid trip for two to Portugal for a Golf Weekend! She won via Cool FM! Keep an ear out for upcoming competitions…

Congratulations to Gillian who won an all expenses paid trip for two to a Man Utd match! She won via Cool FM. Keep an ear out for upcoming competitions on Cool FM…

Congratulations to all of our Fantasy Football winners from the 2013/14 season. Here are the top two winners, who won a trip to a Man Utd match and a Games Console. Check our website to see how you can enter for the 2014/15 season…

Just some of our lucky winners of 2 tickets to the Frampton v Martinez fight in the Titanic Quarter in Belfast. We have away 16 tickets via Facebook, Twitter, Telebetting and our online site www.betmclean.com. Stay tuned for upcoming competitions where you can win prizes as good as this one…

Our two lucky winners of VIP Hospitalty & all access all areas tickets to the Northwest 200 2014 … not to mention a passanger pillion ride around the North West race circuit!

Keep an eye out for our competition next year…

CONGRATULATIONS TO Gavin Campbell, Paula Boyle & Gareth Larkin who were the lucky social media winners of our tickets

for the Frampton match on the 4th April!

Keep an eye out for similar competitions in the future! 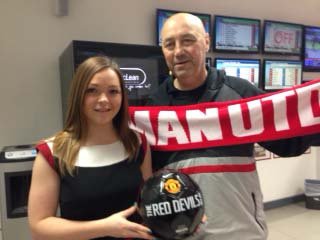 CONGRATULATIONS to Andrew Stone who was the lucky winner of a trip to a Man Utd match! 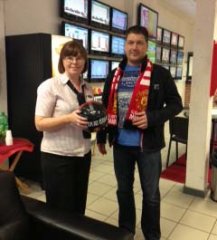 Yet another lucky winner of a trip to a Man Utd match!

CONGRATULATIONS to Dermot Hillen who was the lucky winner of a trip to a Man Utd match!

CONGRATULATIONS to Mark Rice who was the lucky winner of a £1,000 cash prize!

Keep an eye out in shop and on our websites, and an ear out on Cool FM for upcoming competitions!

Congratulations to Wesley Potthurst who won our “Keeper Chellenge” competition on Facebook & won an IPAD!

Congratulations to Stacey Rooney, Carol McCormick & Simona Mueller who were our 3 lucky winners! On the 12th, 13th & 14th of August we gave away a 42″ Widescreen TV, a playstation 3 and Fifa 13! All you had to do was text in the correct answer to a question aired on Cool FM! We also gave away an all expenses paid trip to a Man Utd match (Pictures to come) Stay tuned for upcoming promotions and giveaways!

Congratulations to Aine Armstrong who won our competition & is off to The Open Championship!

– Tickets to The Open Championship for 2 people

– Breakfast & dinner each night of their hotel stay

– Transfers to and from The Open Championship each day

Keep an eye out for upcoming competitions where you could be in with a chance of winning fantastic prizes!

CONGRATULATIONS to Louise Larkin and Jim Thompson who were the two lucky winners of our Northwest 200 2013 prizes! They, along with a guest each, enjoyed an exclusive passenger pillion ride along with entry into the VIP Marquee to enjoy complimentary food, drink and entertainment.

Keep an eye out for upcoming competition for your chance to win a prize as awesome as this!

We offered you the chance to win an exclusive Irish Cup Final 2013 Glentoran jersey in our stores and on both of our Facebook pages. (/Betmclean & /amcleanbookmakers) Congratulations to the winners…

Congratulations to Donal Smith who was the lucky winner of an IPAD!

It could be you next month! Just enter our “Beat The Bookie” competition on Facebook ( /Betmclean)! All you have to do is predict three players to score in that week’s Premier League fixtures … everyone who gets all three right will be entered into a draw to WIN AN IPAD!

Congratulations to Mark Dunn who was the lucky winner of our all expenses paid trip to see Man Utd v Man City on the 8th April 2013. To enter the competition you simply had to set up an online account at www.betmclean.com or via our App and place a bet before the 3rd April 2013! A random name was then picked out and Mark was the lucky winner!

– Limo transfers to and from the airport and Old Trafford

– Executive Tickets to the match

CONGRATULATIONS to our 6 lucky winners who were sent on an all expenses paid trip to the Grand National 2013!

– Tickets to the Grand National

We ran two competitions over the radio (Cool FM & Downtown) … contestants had to ring up with the answer to a question that was asked. Then the lucky winners were picked from each station.

We also ran a competiiton in our shops … you simply had to fill in a competition form and place it in a special box in one of our shops. The winner was then drawn from all of the entrants.

Keep an eye out … it could be you next year!

The Scalextricscompetition was held over four weeks in over 20 of our shops. Entrants had to get a car around 10 laps of our Scalextrics set in the fastest time possible without coming off the track.

Everyone who took part in the competition received their choice of two free gifts (a £5 free play voucher for our gaming machines or a McLeans polo shirt). The entrant to post the fastest time in each shop received a £20 FREE BET and entry into a draw to win the overall prize (a trip to Adrenalin Karting with a friend).

There were five names pulled out of the overall draw with each winner being allowed to bring along a friend to Adrenaline Karting.

What they didn’t know was that there was an even bigger prize at stake… the five winners and their friends all raced in a mini Grand Prix at Adrenaline Karting in the hope of becoming the winner of the mystery prize.

That lucky winner was Adam Allister, who finished the race in 1st place and won an Ultimate Driving Experience Prize at Alltrack Rally Sport.